Over the past few years, more and more people have become interested in the Rainbow Mountain in Peru. However, what a lot of tourists don’t know is that you can find not one, but two rainbow mountains. The original one was Vinicunca, but Palcoyo Peru has also become a very popular destination in the past few years. Now we have the Vinicunca vs Palcoyo dispute that a lot of people are interested in, since they want to know which is the better one.

Why should you visit Palcoyo or Rainbow Mountain Peru?

Regardless of what Rainbow Mountain you choose, the truth is that it’s well worth visiting such a mountain to begin with. For starters, such a mountain has an incredible look and you will be impressed with the entire experience. Visiting a rainbow mountain in Peru is great, and you also have the opportunity to better understand the local culture. Add to that the fact that you can try out some amazing food in the region and also enjoy some fantastic treks, then you can see why more and more people are interested in this type of experience.

When we talk about Vinicunca vs Palccoyo, the truth is that difficulty levels are extremely important to take into consideration. To be honest, it all comes down to what you want from the hiking experience. A lot of people go to the Palccoyo rainbow mountain because the hike is not very challenging. For most people, this is a great option because it feels more like a leisure walk instead of a very demanding hike. The terrain is a bit more flat when compared to Vinicunca. So it does make sense to go for Palcoyo Cusco instead of Vinicunca.
Of course, if you want to challenge yourself as much as you can, it makes sense to try out Vinicunca. It’s steeper and thus the hike is more complex. Not everyone likes flat land for their hike, so if you are into that, Vinicunca is definitely right up your alley. It’s a very good idea to give it a try especially if you are with a larger group of people that want to hike with you.

What is the ideal time to visit Vinicunca or Palccoyo?

The truth is that both of them should be visited between March-November. We think this is a good option because this is the dry season. Since you are coming to the rainbow mountain Peru with the idea of seeing the mountain and enjoying the view, the last thing you want is bad weather. So it makes a lot of sense to visit these rainbow mountains during the dry season.
In case you go during the wet season, you can end up with issues. Either it snows a whole lot, or you can end up slipping more than you might expect. There might even be times when the mountains are covered in snow, so you’re doing the entire trip for nothing. That’s why you should stick to dry season if you can, otherwise there can be challenges during you hike. 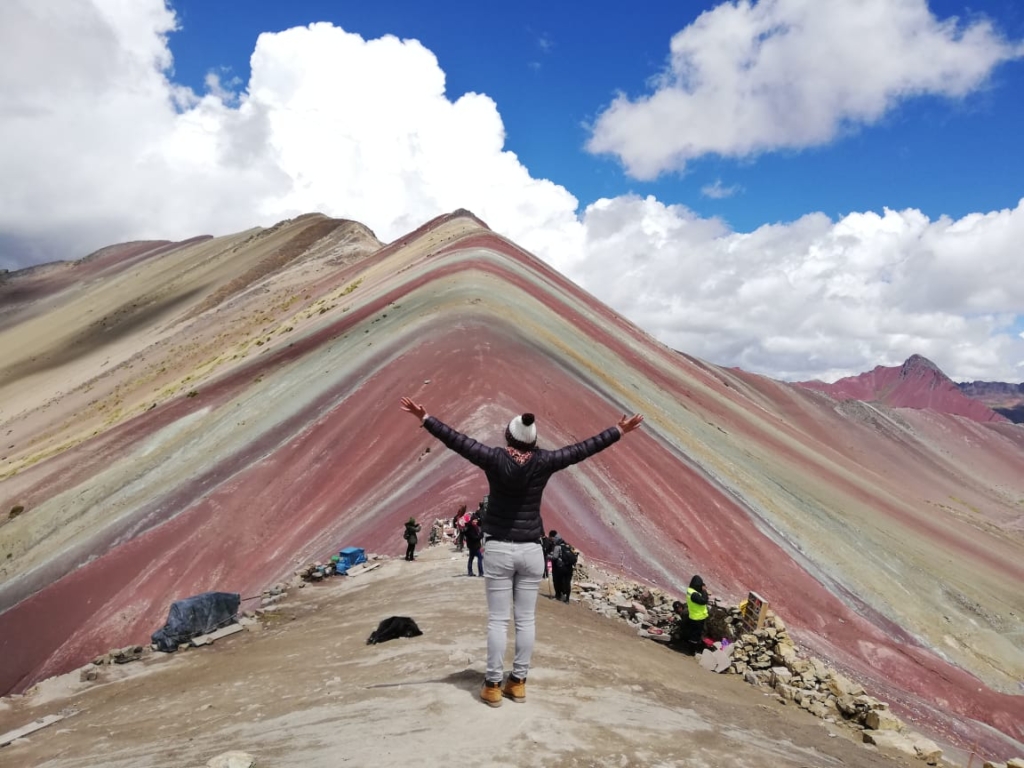 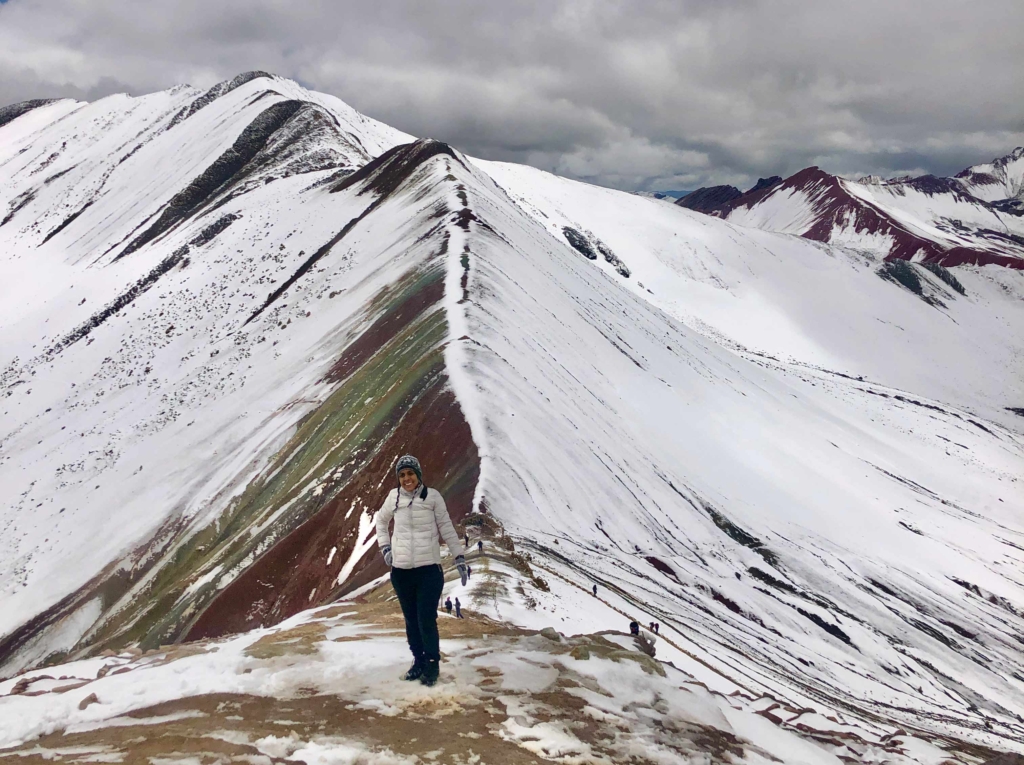 Vinicunca is usually known for having a very low temperature in general. Palcoyo is similar, but the weather is a bit more forgiving. Make no mistake, both places are known for the fact that they have a very low weather, so you need to be prepared for this as much as humanly possible. Taking the right clothes with you can really make a difference. In fact, it will make you either love or hate the experience, depending on the comfort levels. So yes, while the weather differences are not that major, you will notice that Palcoyo is more forgiving when compared to Vinicunca. 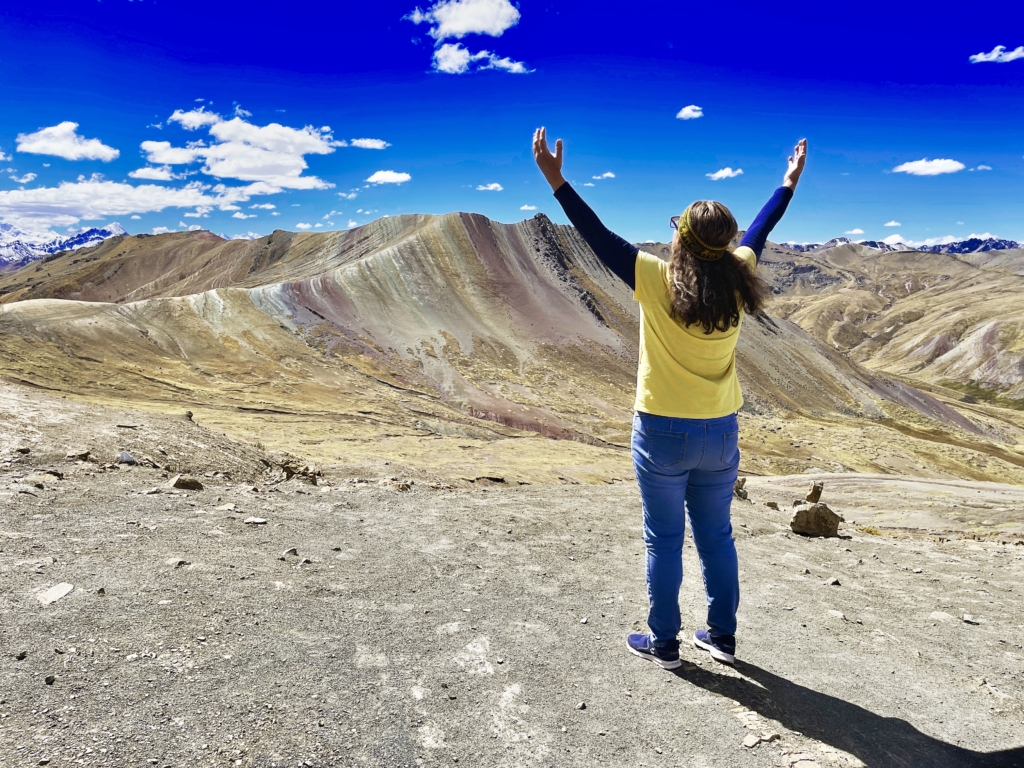 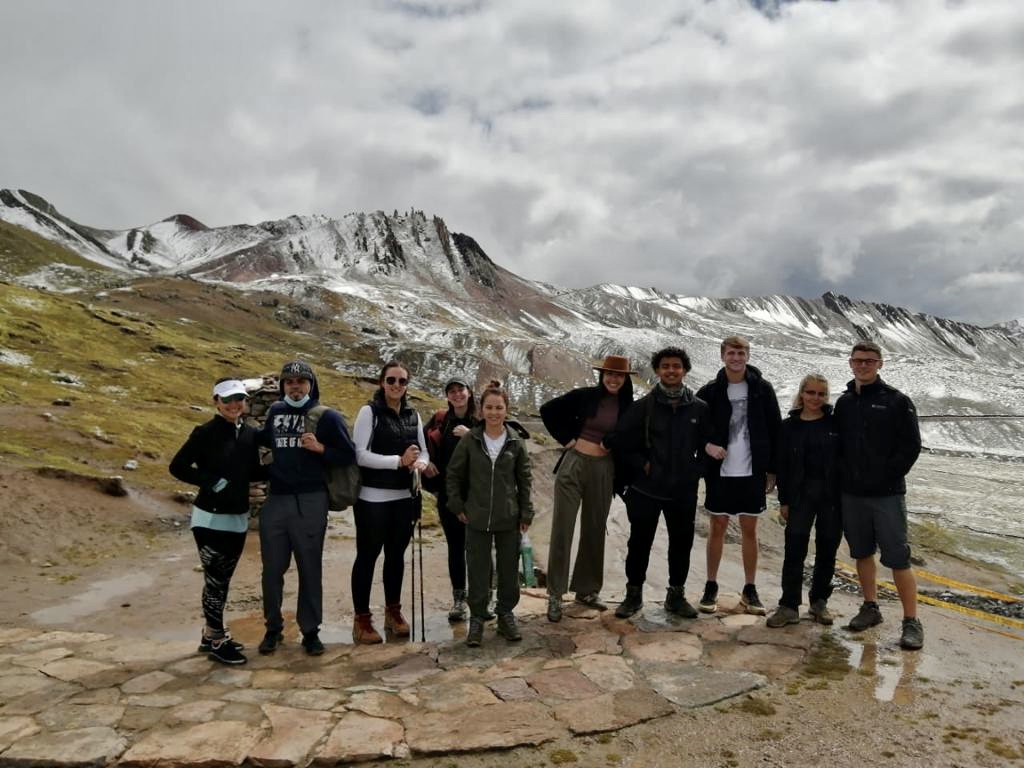 What landscape can you expect?

If you go to one of the two Rainbow Mountain experiences, each one of them has its fair share of interesting features and ideas. What we like about Vinicunca for example is that you have a single Rainbow Mountain, which is named Ausagate. This is in the distance, and you can trek via the Red Valley. It’s a more difficult trek as we mentioned, but the fact that you can get there and see a large mountain with tons of different colors makes it worth the effort.
And then we have Palccoyo Peru which is actually a set of three rainbow mountains, Rocky formations. Not only that, but you might even see multiple locals working on the land. It’s a very interesting and enjoyable experience, and overall it does convey to a pretty enticing and fun experience overall, which is exactly what you want from something like this.
Simply put, it all comes down to you to choose what landscape you want and what you can get as a whole. For the most part, we think that if you want something more spectacular, 3 rainbow mountains are a better sight. That being said, Vinicunca’s sole rainbow mountain is still an incredible sign and combined with the more challenging trek, it’s just bringing in a more interesting and enjoyable experience. But as we mentioned, it’s all about expectations and what you want. You could also visit both if you want, then you can figure out which one was worth it more.

Hiking to these rainbow mountains in Peru is not going to take a whole lot of time. Palccoyo is actually just a one hour hike up. So it’s not exactly that hard to reach, which is a good thing if you want a less demanding hike. However, Vinicunca is not that far either. It’s around a 2 hour hike. So yes, it does require more time, but it’s by no means a very long hike. It’s definitely longer than Palccoyo Peru, if that matters to you.
There are other things we need to mention here. The altitude is 5200 masl for Vinicunca, whereas for Palcoyo is just 4900 masl. Not a whole lot of a difference, but it’s actually important to consider when you want to visit these places to begin with. We do recommend giving them both a try. But it’s crucial to know the differences between the two. This will at least give you a great idea of what you can expect and the value that you can obtain in a situation like this.
Also, you should also consider the popularity of the two rainbow mountain options. Vinicunca is the more popular of the two. It’s the first rainbow mountain that was discovered and popularized. Because of that, most people tend to flock towards it, even if the hike is more challenging. But this also means you have a lot more crowds coming towards it when compared to other mountains for example.
Palcoyo is, on the other hand, off the beaten path. Since it’s not as popular when compared to Vinicunca, the truth is that it’s less crowded and it also has less visitors. We also have to consider the fact that Vinicunca colors seem a bit more vibrant, whereas Palcoyo has less vibrant colors. Again, it’s not a huge difference, but it’s certainly the type of thing that you want to know before you make a pick between the two.

Do you need any practice for these hikes?

When we talk about Vinicunca vs Palcoyo, the truth is that both hikes would need a bit of preparation. Granted, the Vinicunca hike is longer and more challenging, so that one needs even more preparation. But in general, you want to meditate, prepare your mindset and focus. You also want to work out a bit and ensure that your muscles are ready for hiking. Sometimes hikes can be strenuous and just hard to do. Yet if you start beforehand and prepare a bit more than usual, for the most part you will be more than ok and that’s what matters here.
Another thing to consider is that you want to prepare and take some water with you. Hikes can dehydrate you more than you might expect. Some snacks are needed too. Healthy snacks are actually the better ones to focus on, so it’s certainly the type of thing you need to keep in mind. With that being said, if you do have any kind of allergies, it does make sense to at least talk with the doctor. He will give you a good idea of what you might expect and in the end the experience can be extraordinary. Take your time and remember, it’s always worth the effort to visit any Rainbow Mountain Peru.
Book from $35
Rainbow Mountain from Cusco
Read More

The best points for picture in the Rainbow Mountain Peru are those.

Learn about Palcoyo with our video drone and more

Which one would you choose between Vinicunca vs Palcoyo? As you can see, they are vastly different in some regards, so it all comes down to personal preference. If you want a shorter and simpler hike as well as less crowds, Palcoyo is the right one for you. However, if you want a longer and more challenging hike, a vibrant experience and you don’t care about having lots of crowds, then Vinicunca is the original Rainbow Mountain and a great pick!
Copyright © 2022 Inka Altitude Travel Company E.I.R.L Ruc: 20600434315. All rights reserved.